Hook up with that big fish!
Whale Shark Stories & Legends

This is the time of the year when we’re getting all excited about the arrival of the largest fish in the world. While Jacques Cousteau reportedly encountered only two whale sharks in his whole life, you’ll be able to observe huge congregations of this gentle giant here in the Mexican Caribbean, with sightings that are even guaranteed by Pro Dive International* during the season.

We’ve gathered some fun stories and legends for you from across the world. 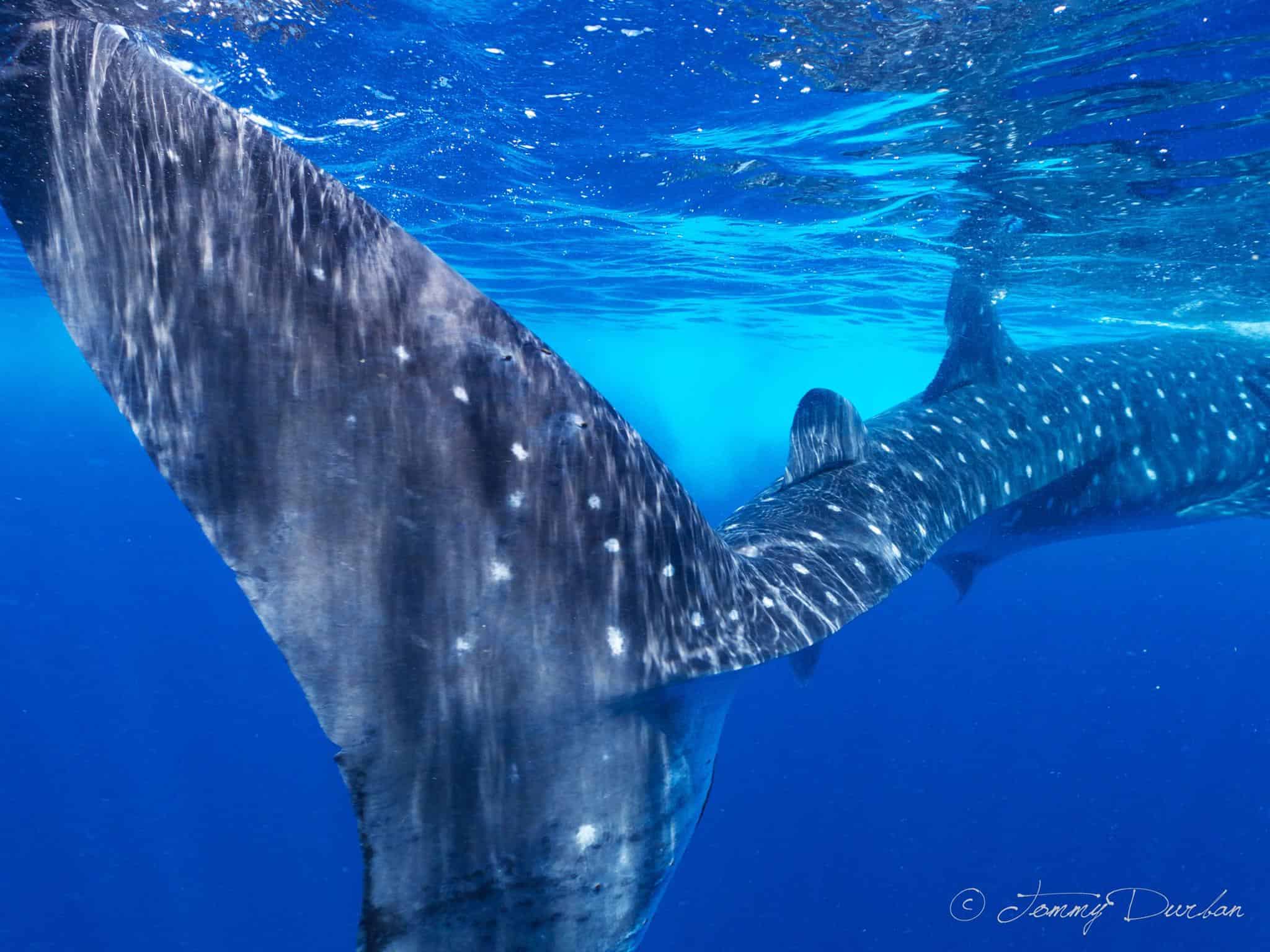 Up until twenty years ago, seeing a whale shark in the wild seemed a rare experience, even for veteran divers. Scientists didn’t know much about the shark’s behavior, food preferences, hangouts and reproduction.

Shark biologists had no idea that whale sharks routinely convene in their hundreds. Discovering such congregations as in Australia and the Yucatan/ Mexico have allowed researchers to tag and observe large numbers of the animal season after season teaching us so much about these majestic creatures.

“Come again?”, in an interview with writer Ferris Jabr for the Scientific American, Dr. Robert E. Hueter (Marine Biologist and Director of the Center for Shark Research at Mote Marine Laboratory in Sarasota/ Florida) admitted to have asked a Mexican fisherman in disbelief after he and his team had studied mainly black tips in Yucatan/ Mexico for almost a decade, not being aware of the large whale shark gathering happening nearby. Apparently local fishermen had known of those seasonal congregations for many generations, but word had never spread.

Whale sharks, known as the world’s largest living fish that’s rivaling Tyrannosaurus rex and other giant dinosaurs in size and weight, seem to have affected people in ancient times just as much as they inspire us today.

Here are some fun stories and legends for you from across the world:

The Kiswahili (or Swahili) word for whale shark is Papa Shilingi, meaning “shark covered in coins”. A Kenyan legend says that soon after creating the whale shark, God and his angels were so pleased with their creation that they scattered gold and silver coins across the fish’s back.

The tribes of Mozambique tell a similar story of one of the gods seeing a whale shark gracefully swimming under his boat during his visit to Earth, and in appreciation of its beauty showered the creature with silver coins that caused the spots all over its body.

It is believed that a centuries-old ceramic statue of a female shaman (Mayan priestess) is modeled and/or painted after whale shark anatomy, considering its irregular dotted pattern, wide toothy mouth and the white stripe on the torso of the figure that could highlight the whale shark’s dorsal fin. The statue was originally thought to represent a jaguar, a “power animal” commonly revered in Mayan and Aztec art.

The Timingila Jataka Medallion which dates back to the second century BC, depicts three men in a boat being swallowed by a large fish (the Timingila) which on its interpretation in 1956, by Sunder Lal Hora, was likened to a whale shark:

“When the fish inhales water for oxygenating its gills, the power of suction is so great that a small boat with three occupants could be sucked into its cave-like mouth as is so clearly shown on the medallion.”

This is the Chinese Buddhist translation of the legend, courtesy of the ‘Corpus Inscription Indicarum, vol. II, part II, Bharhut Inscriptions edited by H. Luders:


“Five hundred merchants start on a sea-voyage. The ship comes near a giant fish which swallows the waves together with all living animals contained in them. With an irresistible force the ship also is drawn into the throat of the gigantic fish. In vain the merchants pray to the different gods, whom they worship, then the captain of the boat says to them that he knows of a great god called Buddha. They should pray to him in place of other gods. There- upon all the merchants together shout ‘ namo Buddhdya ‘ In this way the fish learns that a Buddha has again appeared in the world. It realizes that it would be improper to do any harm to the living beings; it therefore shuts the mouth so that the water begins to flow back and the ship is saved. The fish really has been a monk in its former birth. The name of the Buddha reminds it of its former existence and this led it to the decision to spare the life of the beings.”

In Indonesia there are several legends of whale sharks circulating. Many communities believe them to be sacred animals and forbid locals to capture or kill those sharks.

In Derawan in East Kalimantan, on the island of Borneo, a folktale tells the story of a whale shark rescuing someone from drowning in the middle of the sea. Local fishers also believe that whale sharks attract small fishes, therefore bringing good fortune to the fishers.

The people of Balikukup call the whale shark Hiu Mbok or Hiu Nenek, meaning grandma’s shark. The name derives from the belief that the shark embodies a kind-hearted grandmother spirit. When local fishers encounter a whale shark on one of their trips, they see it as a sign of good fortune and prosperity.

On the island of Java, the people of Muncar believe that a whale shark is the ancestor of every fish in the ocean, and call it Hiu Kekakek (ancestor’s shark). They are also revered as protectors of the sea, and fishermen who encounter the sharks are encouraged to offer it gifts like white rice whilst reciting a Javanese prayer, “Mbah amit putune ajeng e megawe, njenengan paringi rezeki” (“Dear ancestor, I am kindly asking your permission to go to work. Please bless us with good fortune along the way.”).

In Muncar, in 1976 a dead whale shark was found stranded, and due to its sanctity the local community worked together to wrap the animal’s body in a special sacred cloth before burying it.

In the province of Gorontalo, on the island of Sulawesi, people refer to the whale shark as Munggianggo hulalo – the moon shark. According to local fishers, each year the first whale shark sightings herald the start of the fishing season. When no whale sharks can be spotted, locals take it as a sign that there will be no fish to catch that season.

Excited yet, or have your own story to tell? Share it with us at marketing@prodiveinternational.com!

How to start your Whale Shark Adventure in Mexico?

Pro Dive International pioneered this meanwhile popular activity in 2003, as one of the first companies to organize whale shark encounters near Cancun/ Mexico. For their commitment to conservation and the aquatic environment, they have been awarded the prestigious National Geographic Award and Green Star Award. Pro Dive supports The Whale Shark Project which focuses on the protection of these magnificent animals. A portion of their proceeds supports scientific studies.

In 2008, the German TV-Channel 3SAT published this documentary about Yucatan’s whale sharks in collaboration with Pro Dive, experts, and König Media Produktion e.K. (in German):

Join Pro Dive International’s Whale Shark Safari from Cancun, Isla Mujeres, Cozumel, Playa del Carmen and other locations along the Riviera Maya; or contact them for more info and guidance!

* Pro Dive guarantees the sighting of whale sharks throughout the season, which means that if you didn’t encounter any sharks during your first excursion, you can either join the safari for a second time or receive a voucher for your next visit. Conditions apply.