What better prescription to rid one of their fear of sharks than diving right into a shark tank. Do you dare? With bull shark season just around the corner in the Riviera Maya in Mexico, there’s a perfect playground to boost your confidence and perspective of sharks.

We have summarized ten of our favorite, less commonly known facts about bull sharks:

How many of those ten are new to you?

How about a human, do you wonder? Entire 62psi! Although the human record is held by Richard Hofmann from Florida, USA, who achieved a bite strength of 975 psi, which is that of a Grizzly Bear! 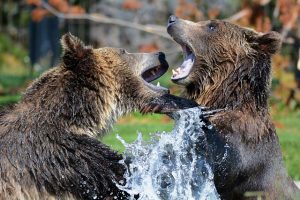 2. Bull Sharks are incredibly agile in the water, reaching speeds of up to 25 mph/ 40 kph. Humans on the other hand can swim at an average of 2 mph/ 3 kph. An Olympic champion like Caeleb Dressel who recently broke Michael Phelps’ world record can reach up to 9 mph/ 14.6 kph. 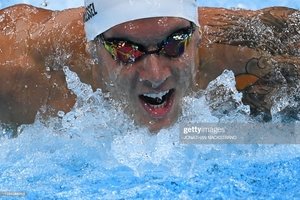 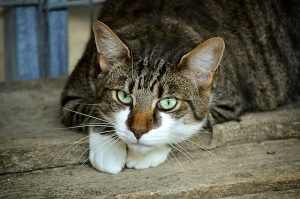 4. Bull Sharks’ testosterone levels are believed to be the highest in the animal kingdom. With 358 ng/ml (nanograms per milliliter) one shark tested even higher than a male African Elephant in heat with 64.4 gn/ml.

But can one Bull Shark speak for them all? Are unfathomable high testosterone levels the reason for aggressive behavior? In reality, their blood contains levels almost a hundred times lower, between 2 to 10 ng/ml. In comparison, a male Rainbow Trout’s average sits at 300 ng/ml and a male human adult’s at 2.50 to 9.50 ng/ml. 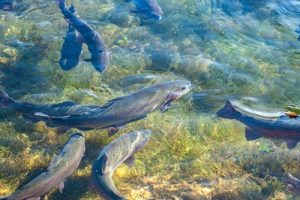 5. Bull Sharks get their name from their overall appearance: Broad flat snout, large stout body, darker coloration on the back, unpredictable. 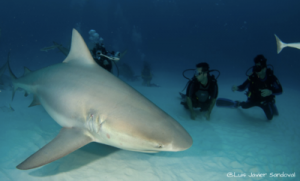 6. Young Bull Sharks can be recognized by their dark spots on their fins, which will disappear as they grow older. 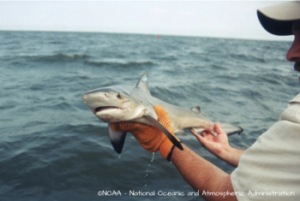 7. One of their main characteristics, which differentiates Bull Sharks from all other types of sharks, is their unusual ability to adapt their organs to freshwater. This incredible animal evolved in such a way that its kidneys, liver and rectal gland can gradually adjust to the salinity of the water in which they are found.

When they change environment, their kidneys remove less salt and more urea from the bloodstream through urine, allowing them to move where no other shark species can. Tell us! If that’s not adaptation and evolutionary perfection, what is it!?

8. Bull Sharks can reproduce at any time of the year and are viviparous, so they give birth to live, fully developed offspring. Just like us humans.

9. Bull Sharks are so intense that competition for life begins even before they are born; it has been proven that intrauterine cannibalism occurs during gestation. As you can hear, the strongest and most developed offspring also feed on their littermates, even inside the womb!

10. When giving birth, the female produces up to 13 embryos per litter, measuring between 56 and 81 cm/ 22 – 32 inches. Newborns are euryhaline, i.e. they are able to live in waters with a wide range of salt concentrations, e.g. in a river upstream and near the mouth, without their metabolism being affected. This makes perfect sense if you consider that these sharks give birth in estuaries and rivers, where the young can grow up protected from other predators to a larger size and go out to sea.

What fact is your favorite? Bull Sharks are fascinating creatures, and yet there is still so much more to learn about those apex predators that we are lucky to observe every winter in the tropical Mexican Caribbean waters in front of Playa del Carmen on the Riviera Maya.

How to start your Bull Shark Adventure