10 Awesome Creatures of the Caribbean

Do you remember that purple flower-like creature on the cover of our January newsletter? Were you able to name it, or did you try to figure out what you actually looked at? What phrase did you even use to look it up? Turns out that this beauty is not the only life form that’s less known among our divers, which encouraged us to write this small piece about strange-looking but awesome creatures that you may be lucky to spot during your dives in the Caribbean in Mexico and/ or the Dominican Republic.

This post is about eyeballs, spaghetti, pistols, buttons, and lots more!

The ocean floor is covered in exciting wonders. Here are 10 of those strange looking but awesome sea creatures for you that you might spot during your dives in the Caribbean:

What you’ve seen in the photo of our recent blog including Saona’s dive sites are blue tunicates. In-fact, it’s not just one, but several. There are over 3,000 species of tunicates to be found in salt water alone. They come in all different shapes, sizes and colors.

The most common tunicates are sometimes called sea squirts because when touched or alarmed by a sudden movement, their muscles contract and the water inside the animal shoots out. They spend most of their lives sedentary, attached to hard substrate, such as dead coral, boat docks, rocks or mollusk shells. Other tunicates live floating freely in the water. They are mostly transparent and look a bit like jellyfish. Some colonial species have been known to reach 18 m/ 60 ft in length!

Tunicates get their names from the “tunic” that they have over their bodies to protect themselves from prey. They can be both solitary and colonial. The solitary animals have their own tunics, while colonials share one. Each solitary creature has two siphons, the oral siphon that receives the nutrient rich current and the atrial siphon that excretes the waste. Colonial creatures sometimes share a common waste siphon.

It definitely looks better than it sounds! Valonia ventricosa, known as Sailor’s Eyeball, is a shiny sphere that somewhat looks like a sea pearl but is actually an algae, found throughout the ocean in tropical and subtropical regions.

What is remarkable about this algae is that it is the world’s biggest single-celled organism! Reaching up to 5 cm/ 2 inches in diameter, a cell is certainly not what comes to mind. In fact, you don’t need a microscope to see that single cell, which ranges from a ball bearing to a golf ball in size.

You can find those fascinating organisms all over the reef as singles or in groups, attached by hair-like threads to rocks.

Reminding of spaghetti, the Eupolymnia Crassicornis, or commonly called Spaghetti Worm, is a segmented worm and a marine relative of the earthworm.

While its body is only 8-13 cm/ 5 to 6 in long and about cm 2.5 cm/ 1 in thick, its tentacles can reach up to 1 m/ 3 ft in length! Its segmented body is hidden underground in a tube-like structure which it creates from sand and gravel which it cements together with a mucus-like secretion from a gland just below the tentacles, generally not moving for most of its life. This creates a safe shelter from predators, while its elastic-like tentacles can extend and retract as needed and will regenerate if broken or eaten.

Spaghetti Worms are deposit feeders extending their tentacles out and along the seafloor to gather dead organic matter that originated as diatoms and other planktonic microorganisms. The collected detritus is then passed along a groove in their tentacles to their mouth, to be consumed.

What looks like a field of miniature cups are in-fact Mermaid’s Wineglasses, Acetabularia crenulata, a green algae of the family of Polygonaceae. This algae is among the largest single-cell organisms and features an unusually large nucleus, because a part of one species can be grafted onto another.

Acetabularia species have an umbrella-like appearance and are anchored to their substrate with root-like rhizoids. A ring of branches, either separated or fused sits on top of the 0.5-10 cm/ 0.2-3.9 in tall, slender stalk. Some species may have rings of hair-like structures along their stalk; and a large nucleus is located near its base dividing many times as the algae matures and reproductive structures are forming.

This small invertebrate – Alpheus armatus – packs a powerful punch, with bullets of bubbles! They’re quite small, only reaching a few inches in size, but one of its claws is much bigger than the other growing up to half its body length. This large claw holds the pistol shrimp’s superpower.

When a pistol shrimp senses prey nearby, it will open its big claw, filling a small chamber in the crook of the claw with water. Then it aims and closes the claw, a small plunger like piece on the top claw forces the water out of the chamber at speeds as fast as a car traveling down the highway. This creates a powerful bubble that kills what’s in its path.

When the bubbles pop, it makes an incredibly loud “snap” sound that gives these shrimp their name. Their bubbles have measured in at 218 decibels, which is louder than a speeding bullet. It also generates heat that reaches 4,427 degrees Celsius/ 8,000 degrees Fahrenheit, which is four times hotter than lava! All this all happens in a tiny fraction of a second, though, meaning we do not hear it above a loud span and the heat dissipates rapidly.

The Spirobranchus giganteus, Christmas tree worms are named for their bright colored plumes (fir tree-like appearance) festively protruding from their tube-like body. They live in coral and up to two-thirds of the worm is anchored inside the coral when its plumes are visible. The plumes are composed of radioles (hair-like) appendages radiating from the worm’s spines. These hairs are used for respiration and to catch dinner floating by in the water, usually microscopic plants and animals.

Once anchored in its coral home the worms are sedentary. Only moving when started, rapidly retracting into its burrow to hide from predators, later poking a small number of its bristles out of the burrow to determine if the danger has passed. 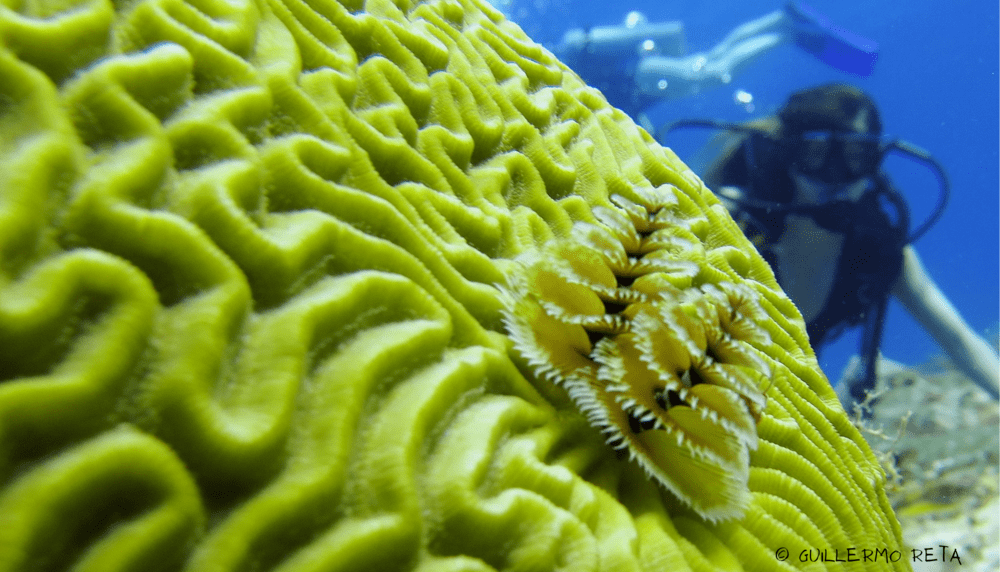 Although they aren’t very big, averaging about 3.8 cm/ 1.2 inches in length, they can be easily spotted due to their bright plumes and distinctive shape. They come in a huge variety of colors and are beautiful to watch.

This amazing creature, the Porpita porpita, is superficially similar to a jellyfish, but it’s more like a Portuguese Man O’ War which is a siphonophore. They can have both female and male sex organs, means they are capable of reproducing on their own.

Blue buttons can grow up to 3 cm/ 1.2 inch in diameter. They live on the surface of the sea and consist of two main parts: the float, which is hard, almost flat and responsible for vertical movement, as well as for communication, and the hydroid colony, which resembles tentacles that vary in color.

The blue button has a single mouth located beneath the float, which is used for both the intake of prey and the expulsion of wastes.

Commonly mistaken for a nudibranch by the majority of divers, the Flamingo Tongue is in fact a soft slimy snail carrying its house, or marine gastropod mollusk. With exuberant imagination, its bright, occasionally pinkish shell and the tiny size of the snail’s body could slightly remind us of the tongue of a flamingo, which is most-likely how it got its name.

Adult flamingo tongues feed on corals. They scrape the polyps off the coral with their tiny teeth, leaving a trail. Besides them not eating much, their population is being controlled by their predators, which means they don’t pose a lethal threat to the reef.

Speaking of Nudibranchs, they are a kind of sea slug with over 3,000 species found in all climate zones. Nudibranchia are marine mollusks without a shell. Their name means ‘naked gill’, referring to the breathing apparatus on the outside of their soft bodies.

While sea slugs tend to be entirely associated with Nudibranchs, the majority of those gastropods belongs to the group Opisthobranchia. There are Sap-sucking slugs, Headshield Slugs, Batwing Slugs, Bubble Snails and Sea Hares. How cool is that? Here’s a Lettuce Sea Slug for you…

A sea slug’s diet consists of algae, plankton, and jellyfish. Some are herbivores, others carnivores. And like most land snails, they are hermaphrodites, featuring male and female reproductive organs in the same individual.

There’s so much diversity and interesting stuff about those peculiar creatures, that we may dedicate a separate blog to them.

Sponges have been around for approximately 600 million years! There are about 8,550 currently living sponge species today, ranging from the bath sponges which are harvested for humans, to giant sponges over 2 m/ 6.5 ft tall that are found in Mexico, like at dive site Tortugas in Playa del Carmen, which is covered in huge barrel sponges.

Everywhere you look on the reef you will see a huge variety of sponges in every shape, size and color imaginable, including bright purples, blues, yellows, reds and white. Their shape and unmoving nature convinced early naturalists that they were plants, not until 1795 when their feeding method was described they were finally recognized as animals.

Sponges filter feeders circulating water through a unique system of water canals to filter out food particles. They are very important inhabitants of coral reef ecosystems affecting water quality on the reef as they filter water, collect bacteria, and process carbon, nitrogen, and phosphorus.

The most incredible fact about sponges is that their cells can move and change their function. They are only animals that if broken down to the level of their cells, can reassemble themselves!

While those 10 are only a tiny fraction, there’s lots more of underwater awesomeness for you to explore in the Caribbean!

How to start your diving adventure