About Us
Kontakt
Deutsch
Menu 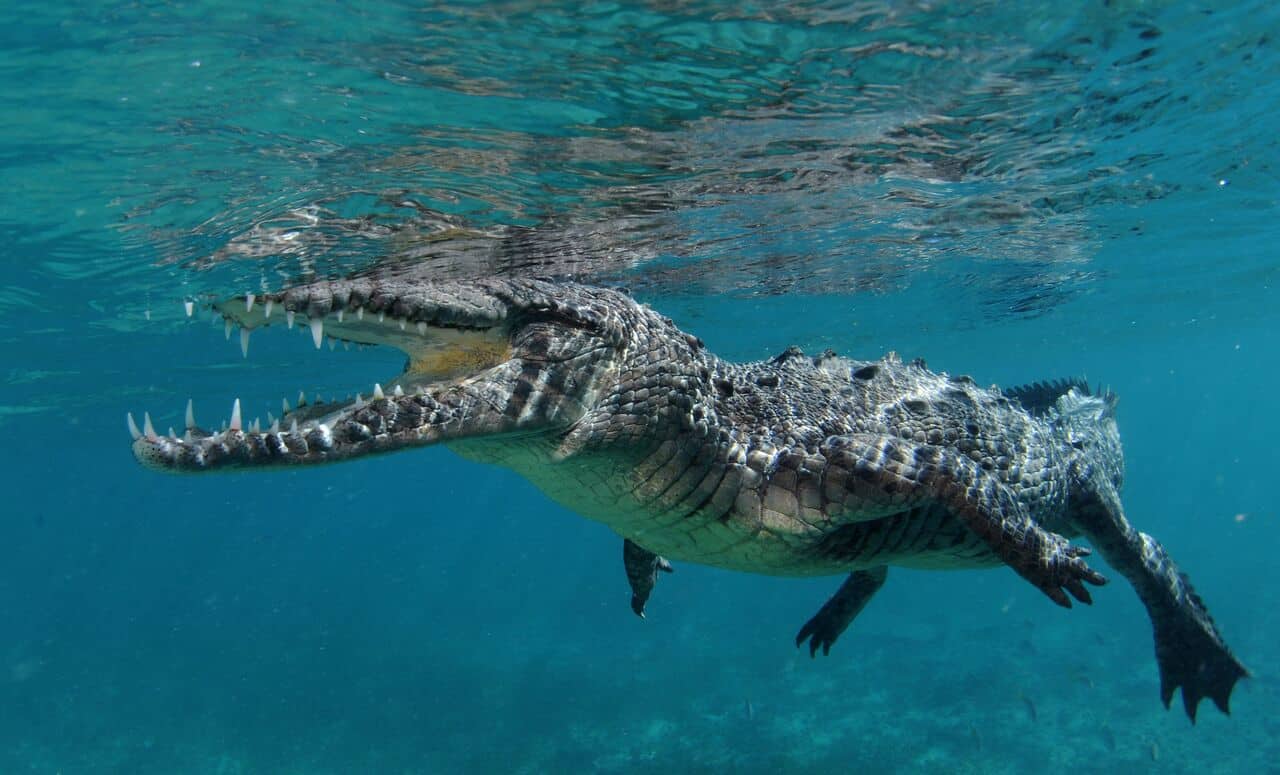 WE NOW OFFER SHARK DIVING AND SNORKELING WITH REAL CROCS IN STUNNING CUBA!
A ONCE IN A LIFETIME TRIP! 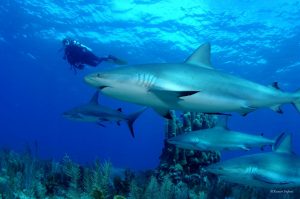 If you are looking for a real thrill experience, diving in Jardines de la Reina is definitely a great choice. This pristine underwater world consists of amazing coral reefs and abundant marine life.

This place is called “Shark´s paradise” for a reason. During the dive you can expect that there will be even 30 sharks circling around you!

The common species are Caribbean reef sharks and silky sharks. Due to the fact that this natural ecosystem has been protected for many years, sharks actually are not afraid of divers but very curious.

The spectacular underwater show is guaranteed. 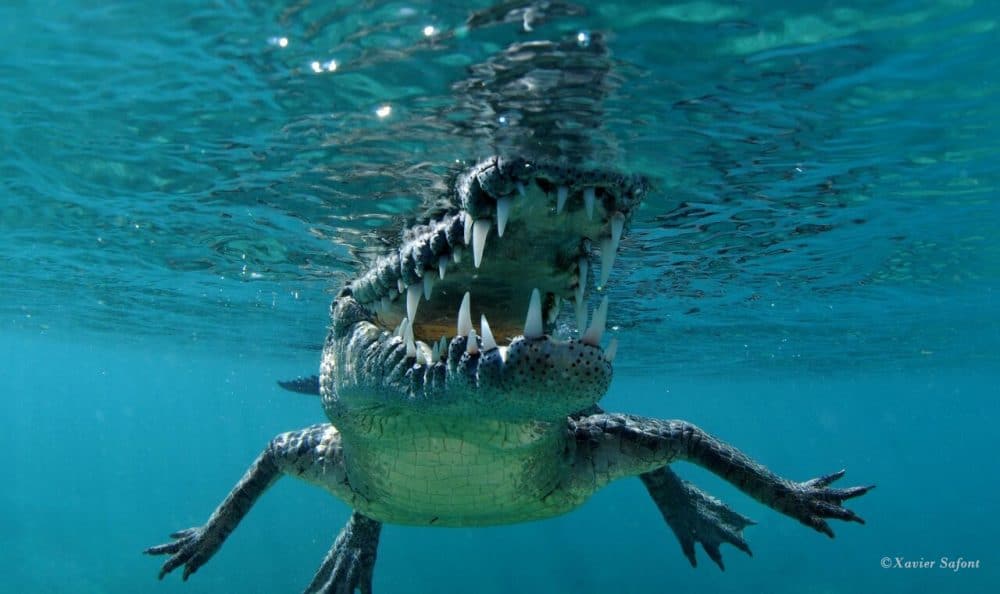 Undoubtedly, one of the most exciting encounter of this trip is snorkeling with crocodiles.

By swimming on the surface of mangroves you will have amazing chance to have the close interaction with these amazing creatures. The American crocodile is one of the most common species living in this area.

Observing crocodiles in their natural habitat is a real wildlife adventure! 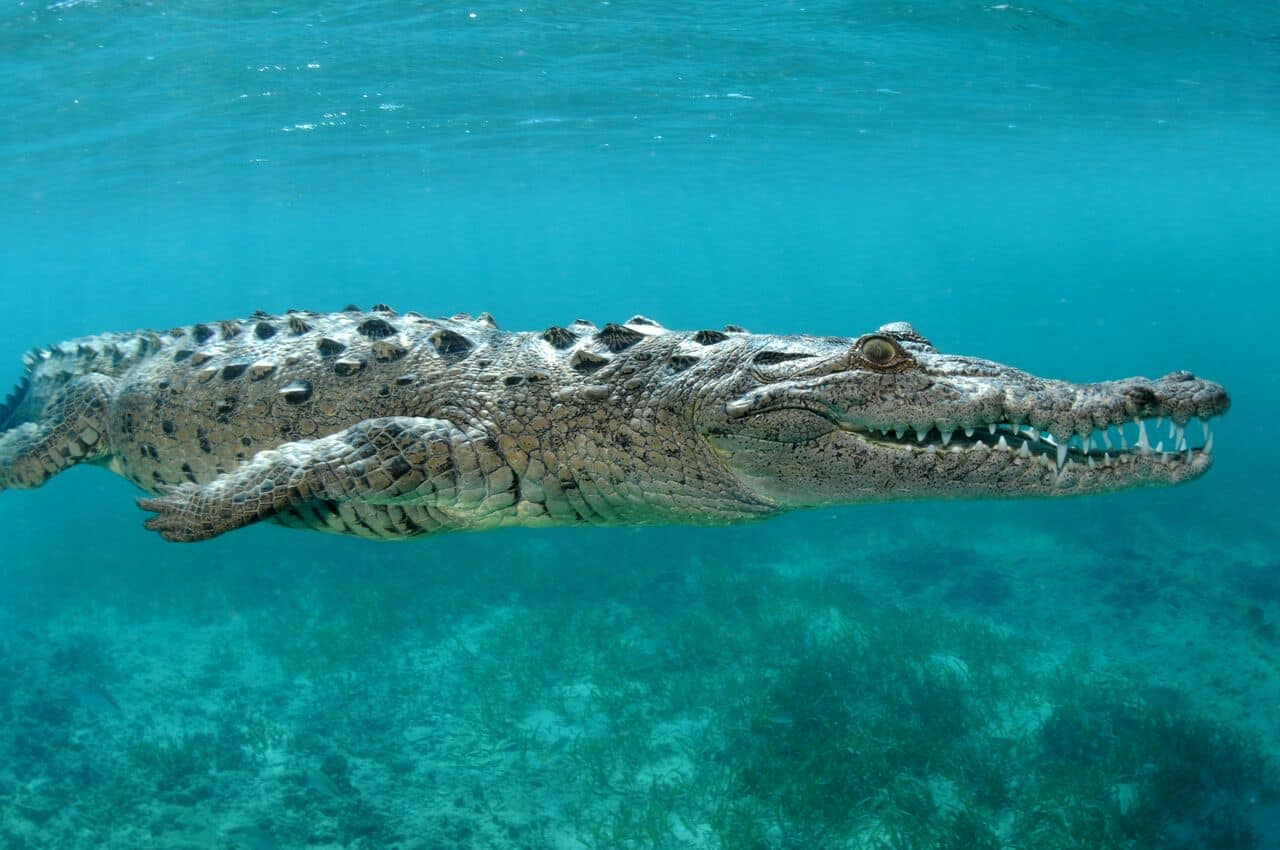 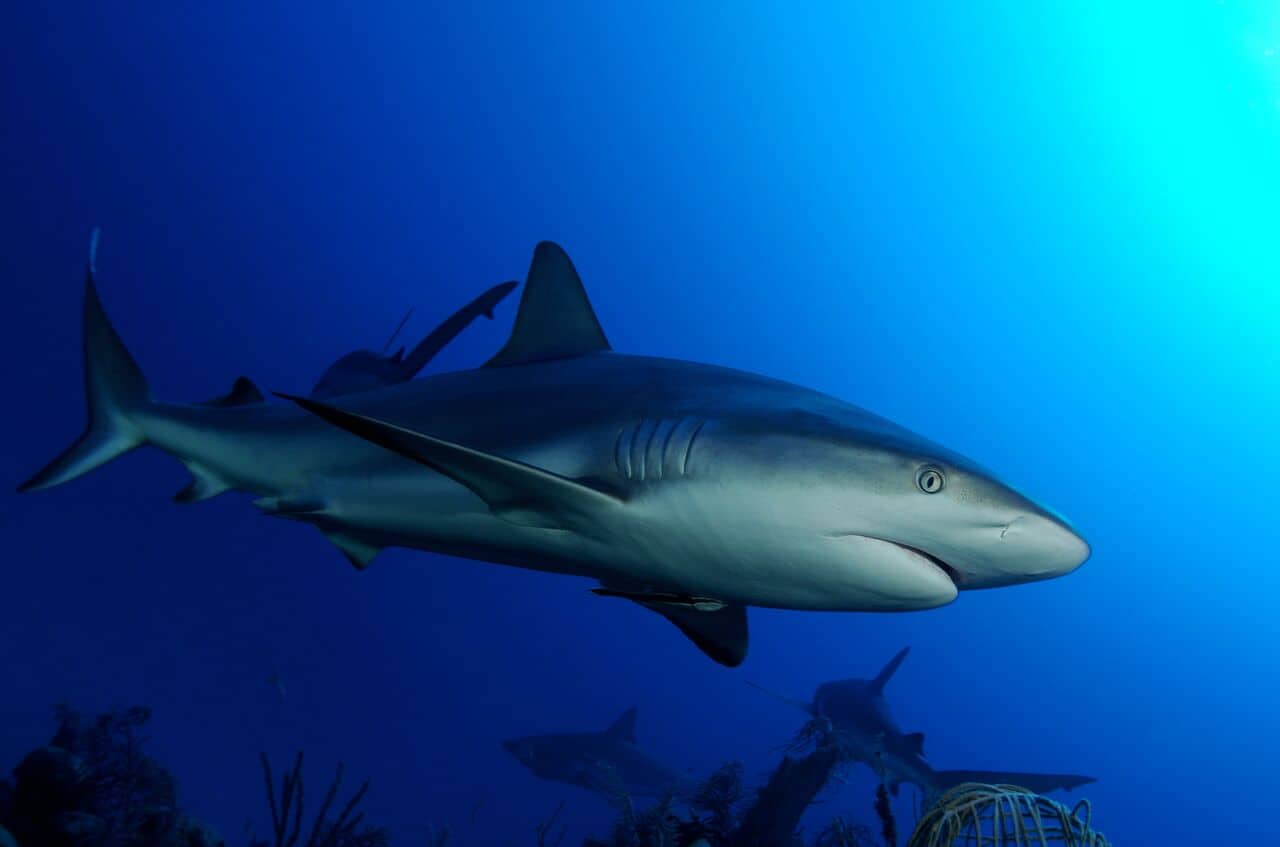 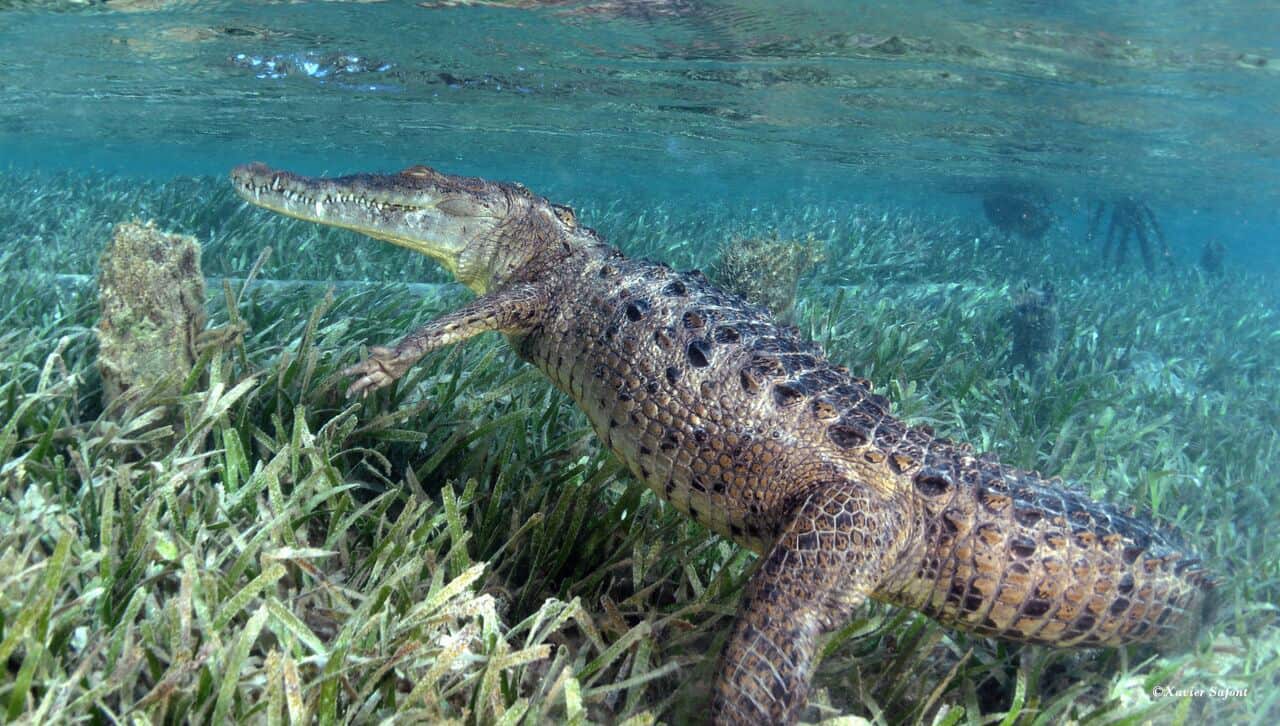 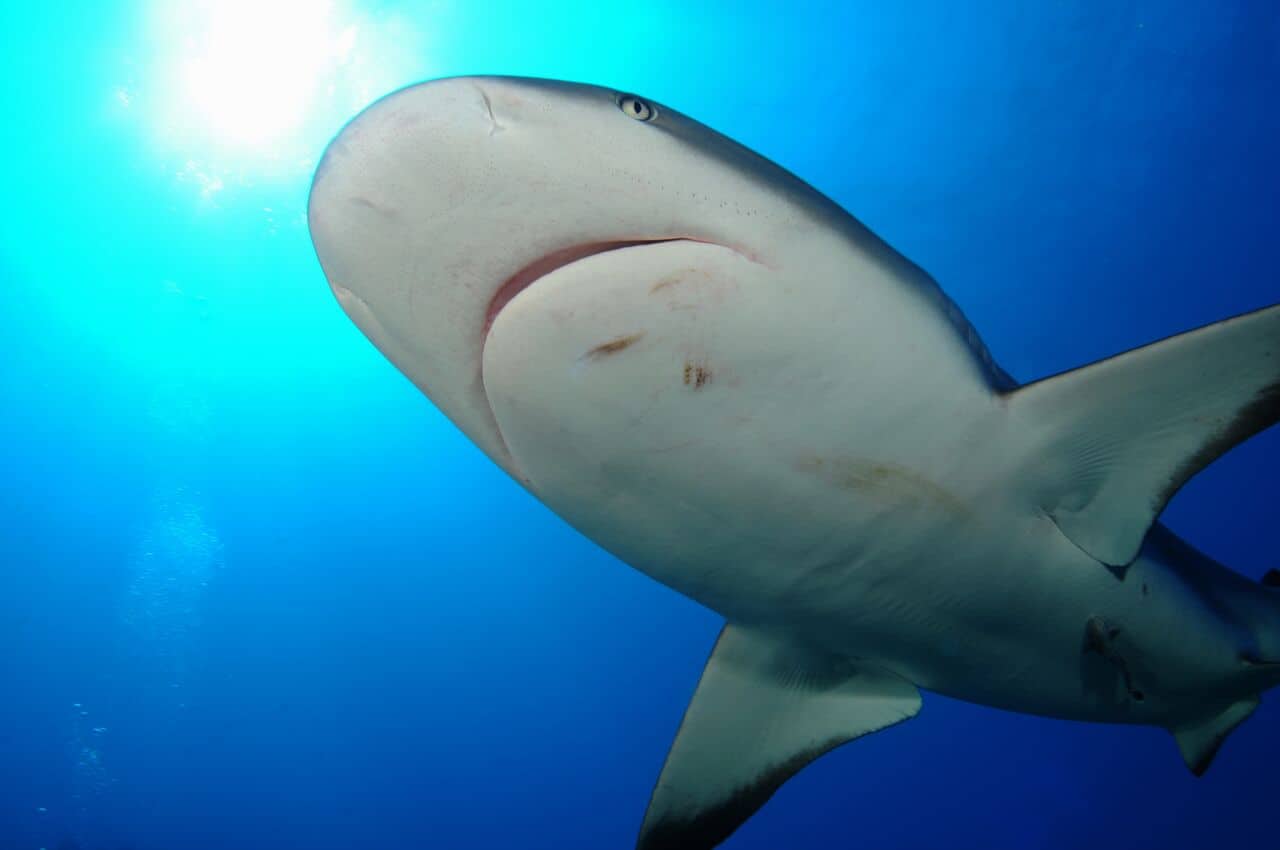 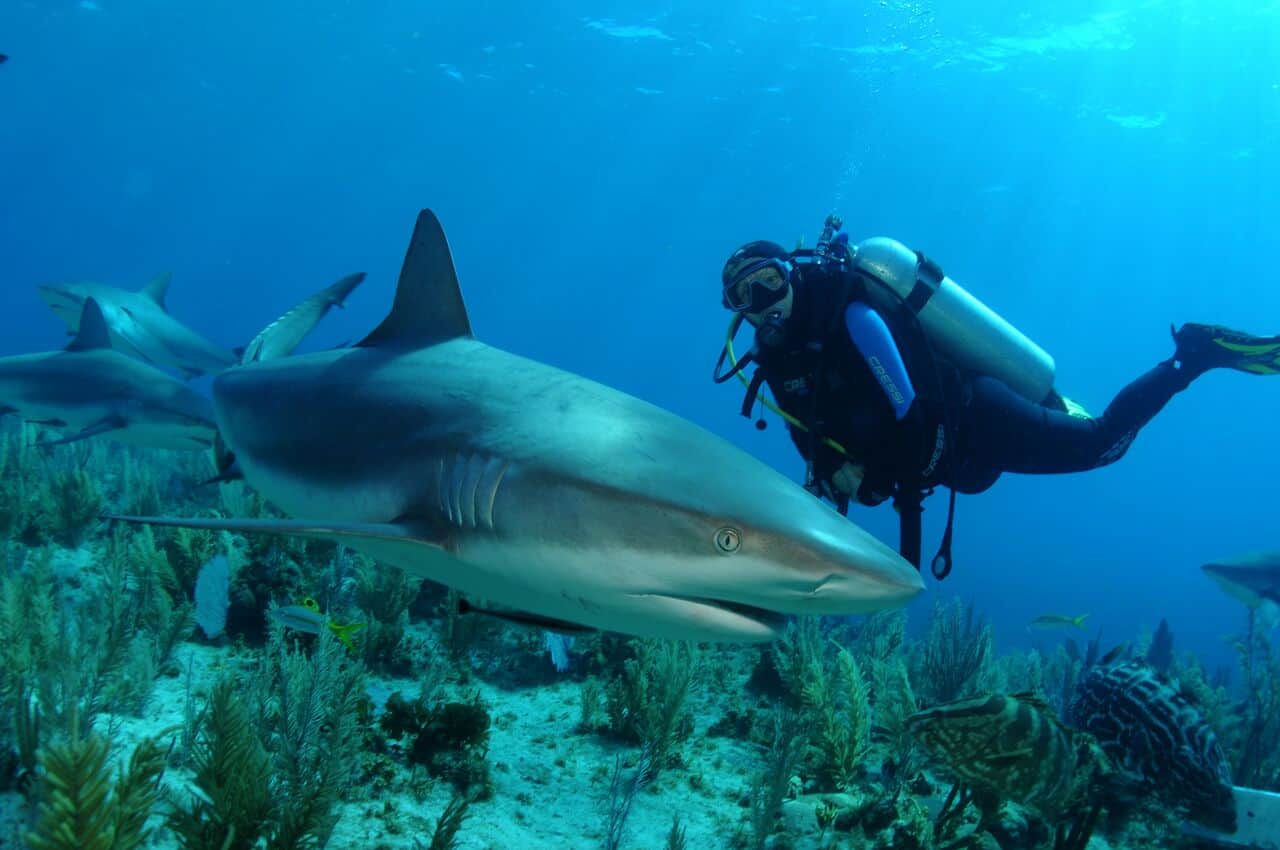 An underwater paradise is all that comes to mind when you first enter the water. Imagine the vertical
walls covered with brightly hued sponges, huge Pilar Corals, black corals extending its branches in
the contrasting blue water.
Many species of gorgonians, fragile laminar corals showing their beautiful shapes through crevices,
canyons and caves. The mangroves providing an incredible nursery area for young fish populations,
filtering the water that goes to the reef together with the sea grass beds and in return receiving
protection from the open ocean wave energy; all interconnected in a very fragile net that helps keep
its variety, richness and splendor.
The biggest populations of adult fish in the Caribbean, Sharks, Snappers and Groupers; Jewfish up to
400 pounds are an everyday experience. Sharks are one of the main attractions and you can see
them everywhere. You can easily dive with 6 different species: Silkies, Reef, Lemon, Black tip, King
Hammerhead and nurse sharks. From July to November you have the chance to swim with Whale
Sharks. Gardens of the Queen is certainly one of the last virgin reefs known by man. Dive and
snorkel sites are well protected from the winds and sea currents. Visibility is more than 40 meters.
There is a wide variety of fish and corals.

CONTACT US FOR MORE INFO & EXPERIENCE AN UNFORGETTABLE ADVENTURE!! 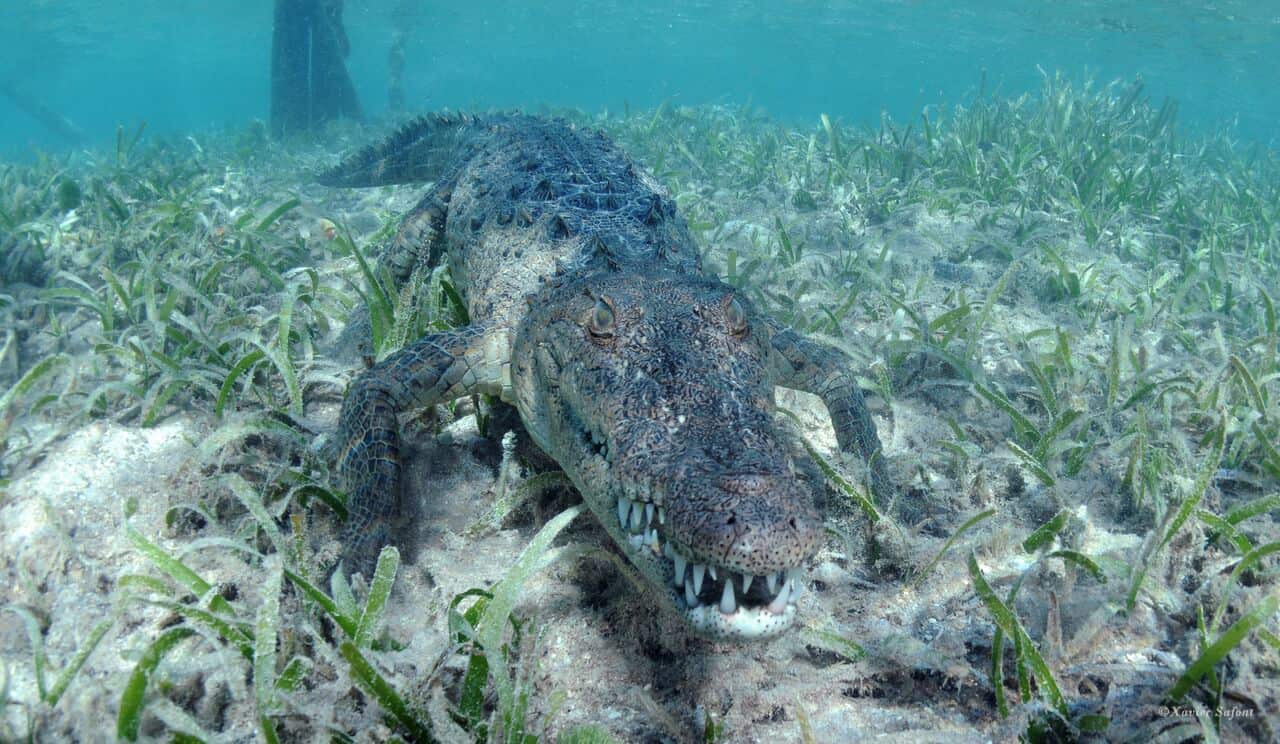 CROCS & SHARKS IN CUBA BY AVALON

The American crocodile (Crocodylus acutus) is a species of crocodilian found in the tropics. It is the most widespread of the four species of crocodiles from the Americas. Like all true crocodilians, the American crocodile is a quadruped, with four short, stocky legs, a long, powerful tail and a scaly hide with rows of ossified scutes running down its back and tail. Its snout is elongated and includes a strong pair of jaws. Their narrow heads and long snouts is what distinguishes them from alligators. Its eyes have nictitating membranes for protection along with lacrimal glands, which produce tears.

The adult American crocodile is a greenish-gray crocodilian with black mottling. They can reach lengths of about 3.8 m, although in other portions of their range, individual crocodiles may reach 6.0 m. Like all other crocodilians, males are larger than females. All adults have a hump above the eyes which may or may not be distinct, and irregular, asymmetrical dorsal armoring. Hatchlings measure approximately 27 cm and are normally yellowish tan to gray with dark crossmarkings on the body and tail.These markings fade as the animal grows.

The American crocodile can be found very often in Jardines de la Reina, in shallow seagrass areas and mangrove channels and they nest in beaches. They are very attractive for photographers as these crocs are easy to find, and it is relatively safe to go in the water with them to take good pictures.

Primarily fish, and other aquatic species including turtles and crabs. Also takes birds. Feeds primarily at night. Juveniles take small fish and invertebrates. Crocodiles eat almost anything that moves and some things that do not, and the bigger the crocodiles, the bigger their prey. Hatchlings and young crocodiles eat small fish, snails, crustaceans, and insects. Adult crocodiles feed at night on schooling fish, crabs, turtles, snakes, and Jutias (small mammals)

Crocodilian reproduction is the most advanced among reptiles. Courtship and nesting are complex. Sexual maturity depends on both the size and age of the animal. Unlike birds and mammals, the sex of embryos is not determined at fertilization, but by the temperature at which the eggs are incubated. It is likely that courtship occurs in late January and February and peaks 6 to 8 weeks before nesting. During this period, crocodiles remain in their inland habitats of mangrove swamps.

Crocodile courtship consists of a complex and varied sequence of behaviors that can last for minutes or hours and is performed repeatedly over the course of the courtship period, which may last for several days. After courtship, the male and female part company and may seek other partners.

The American crocodile is found in about 18 countries in the northern tropics. As the American crocodile produces a commercially valuable skin, the principal reason for past declines in population size can be attributed to the extensive commercial overexploitation that occurred during the last 30 years. Current threats are habitat destruction and in some areas continued hunting. In Jardines de la Reina Marine Park this species is protected and is one of the examples of how valuable are animals when conservation is related with tourism, as this is one of the biggest attractions of the park.

Information on genetic diversity, home range and habitat used by the American crocodile would assist decision-makers dealing with the human-crocodile conflict, and for developing management programs in general to protect the species.