How often have you heard us rave about one of the most impressive cenotes on the Riviera Mayan corridor in Mexico – the Tajma Ha? But only a few are aware that there is more to it. Something so extraordinary and mysterious that will make your mind spin next time you set foot on those sacred grounds.

Cenote Tajma Ha, which translates to Hidden Water, has probably one of the most entertaining stories and urban legends attached to it. And that’s no surprise, considering its fairytale setting of a massive sinkhole in midst the lush tropical jungle that is inhabited by colorful Motmots, its breathtaking limestone formations of giant stalagmites and stalactites, its tunnels and underground bat cave with small bats hanging from the ceiling, its big open cavern called Sugarbowl with spectacular light shows on sunny days, its haloclines that create mesmerizing mirror effects, its hidden fossils, and most exciting of all a rock formation that looks like a stairway to heaven. 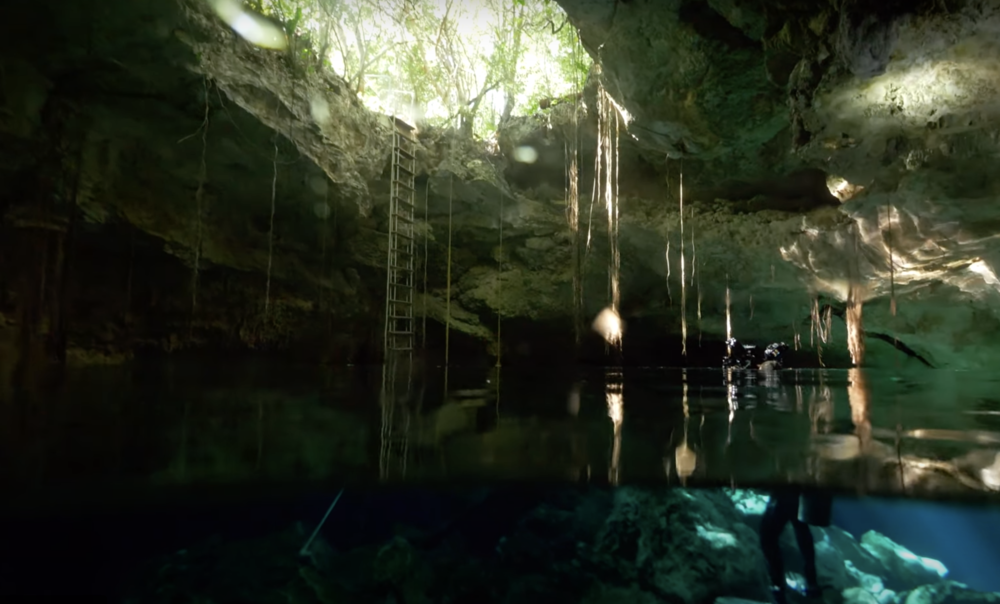 Perfect for inspiring your senses, isn’t it?

Talking about cenotes in general, most of our divers already learnt that the ancient Mayans didn’t only use those wells as a freshwater source, but treated them as the entrance to Xibalba – the underworld. Their openings served as vital portals through which the deceased souls passed, and humans and deities were reborn, and as a place where the Mayan gods would visit, like Chaac the Mayan god of rain, thunder and lightning. As a place of great spiritual meaning, the Mayans worshiped their gods through sacred rituals, offerings like jade, pottery and gold, and human sacrifices including men, women and children.

Guardians of the Cenotes

“Did you see those ghost-like shapes when crossing the halocline?”, “Something was pulling my fin!”, “And I felt a slap on my head when surfacing.”

Does this sound familiar to you, or perhaps even happened to yourself during a dive in Tajma Ha? Occurrences and complaints like those were pretty common for some time and used to be subject to much laughter among diving professionals.

One of the most interesting Mayan legends involve mythical creatures known as Aluxes. They are generally described as little beings, resembling a dwarf, no more than a meter/ 3 ft in height with a comical appearance like large noses, ears and eyes, and said to be infused with magical powers.

Aluxes were created and thought of as nature’s guardians and protectors of lands. They can be experienced in many ways. Some of its powers are invisibility or they can manifest as beings of light. Sudden noises, things moving or disappearing, laughter and child’s noises heard when no one is around, strange light reflections on the rock walls, can all be associated with Aluxes.

Divers can enjoy even more magical experiences. Pay the entrance fee to get permission to enter, dive in its pristine waters, and notice the reflection of your light on the rocks. Strange shapes like smiling faces or little men might be seen, and good fortune will be bestowed upon you. Decide to enter the cenote without the owner’s permission, and get you scared away from the land and bad luck brought upon you.

Tajma Ha’s guardian Alux had earned its reputation as one of the naughty kind, after visitors took advantage of the aging owner’s amnesia and simply sneaked in without depositing their fee in a clay tray on a table at the entrance where the old man sat. Or the owner would suddenly forget that you paid, only moments later, causing the “lack of permission” and the Alux’s awakening. Meanwhile, visitors are asked to check in by signing a logbook. 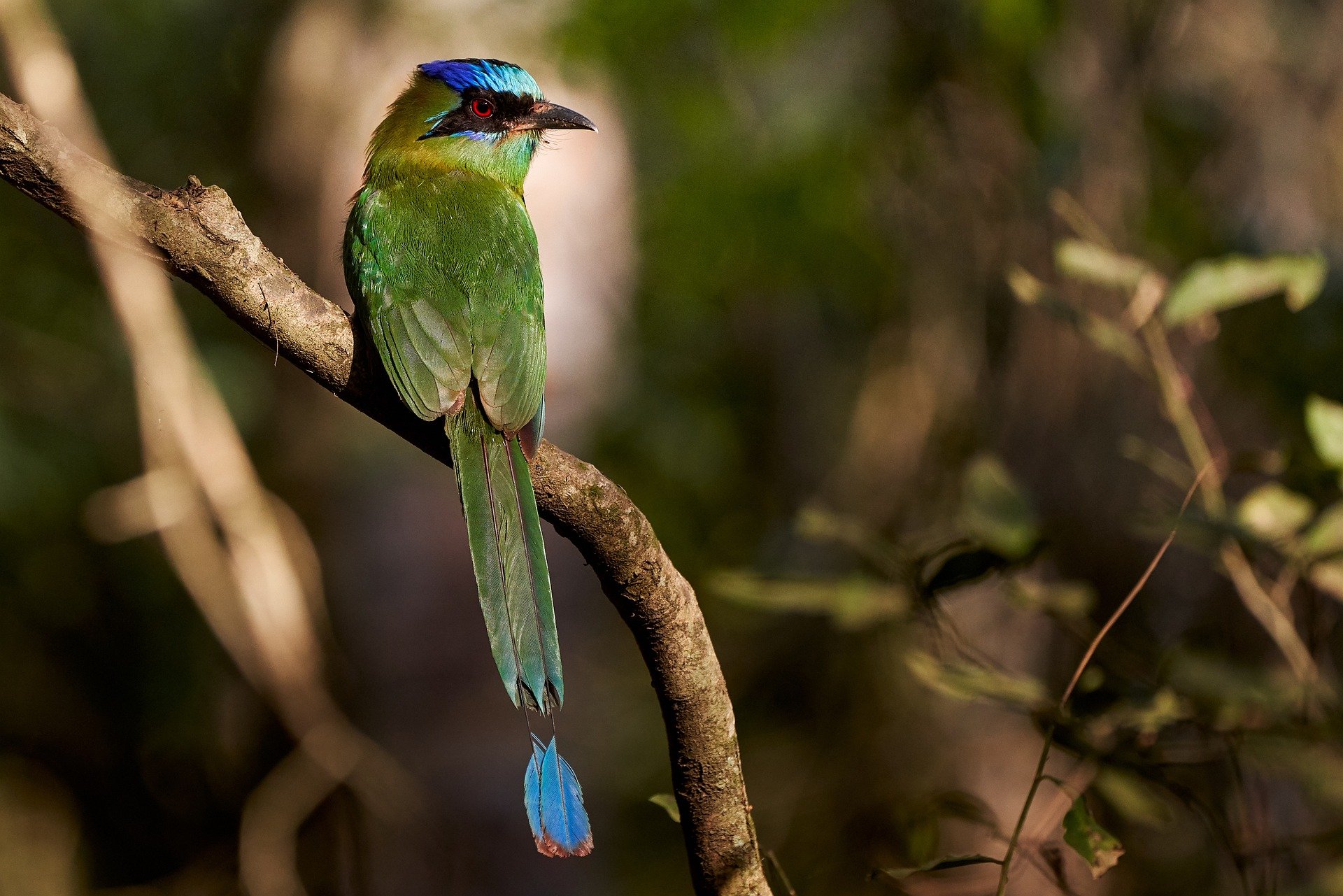 Motmots  are easily recognizable by their racket-shaped tail feathers that distinguish them from other birds, resembling a pendulum of an antique clock. This endangered colorful bird uses its decorative tail to communicate with other Motmots by wagging it forth and back.

The legend says that this bird – a relative of the bird of paradise – considered itself too beautiful and aristocratic, as to join the work efforts of the other birds to build a shelter from the upcoming storm and rain. While hummingbirds, turkeys, toucans (Panchel), woodpeckers (Chujut), parrots (Mox), chachalaca (Baax) and other birds collected construction materials and food, the Motmot preferred to hide inside the crack of a stonewall, not realizing that his royal long tail was still hanging outside when he fell asleep.

Waking up, he found his once majestic tail left with only two bare and ruffled barbs. Too proud to admit his arrogance, he decided to hide in a hole (cenotes) in the depth of the forest.

What makes this bird a Guardian? As the legend continues, with a new responsibility assigned to the Toh (Motmot) that was now left with only 2 tail feathers, it’s deemed to overlook the cenotes sitting on surrounding tree branches and fight any evil spirit that tries to escape from the underworld. If it manages to escape, the Motmot loses one of its feathers, if it wins and the spirit returns to the underworld, it keeps it. This explains why you may come across some Motmot with only one to none feather left.

The best time to observe them and to listen to their unique whoop-sounds is during mating season in spring.

There is an abundance of Mayan legends and Alux-related stories. Or should we call them Karma? ? Treat nature well, or get pelted by little rocks when you walk in the jungle, a bird poops on you, get your fins pulled underwater, or receive a slap on the back of your head when you surface in a cavern. Who knows, next time you fall out of a hammock it might just be an Alux having some fun.

Do you have similar stories to tell? Let us know and perhaps get them even published in one of our next newsletters: marketing@prodiveinternational.com

How to start your Cenotes Adventure?